PHOTOS: The truth about Russia’s war on Ukraine

In September 2014, I watched a tank battle from a hilltop in Mariupol, Ukraine.

I toured that battlefield, the day the first cease-fire was signed, on Sept. 5, 2014. I witnessed a wasteland of charred, destroyed tanks, and armored personnel carriers. And scores of dead soldiers who reminded me of the plaster molds of the dead in Pompeii, the way they seemed to be frozen in the moment and the motion of their deaths.

The conflict was then, and it remains today, a real war.

>>> Editor’s note:  This article is a transcript of remarks by Nolan Peterson, The Daily Signal’s foreign correspondent, to the United States-Ukraine Working Group Yearly Summit in Washington, D.C. The June 15 event was sponsored by the American Foreign Policy Council, the Center for U.S.-Ukrainian Relations, and the Ukrainian Congress Committee of America. <<<

In the early months of the war, with Ukraine’s regular army on its heels, everyday Ukrainians filled the ranks of a partisan army that stopped an offensive by combined Russian-separatist forces, which was, at that time, leapfrogging across the Donbas. 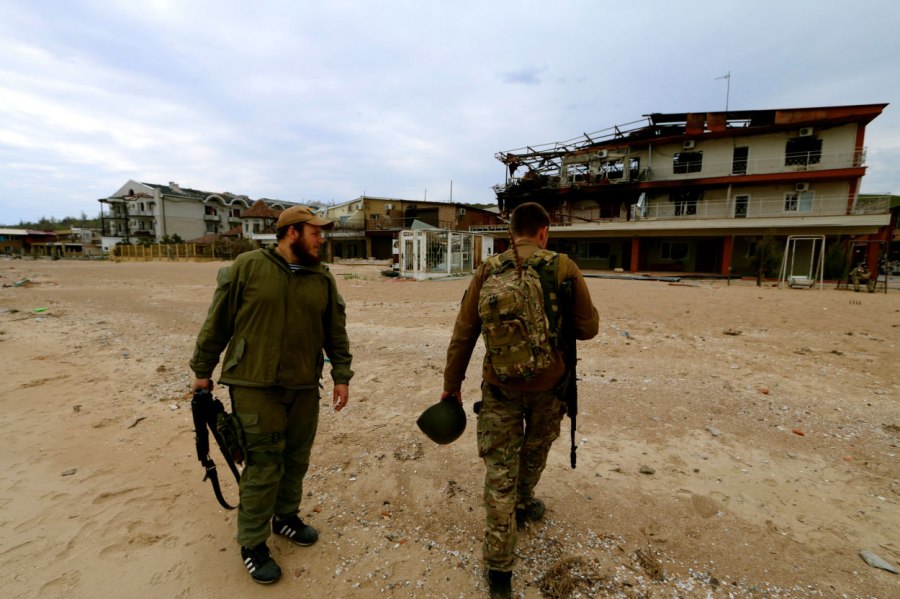 It was a grassroots war effort—an example of a society that didn’t need to be coaxed into a war by propaganda, but by a spontaneous, organic realization that the homeland was at risk.

Ukrainian society, not its armies, repelled Russia’s 2014 invasion of the Donbas.

And now, three years after the war began, and more than two years after the Minsk II cease-fire went into effect, Ukrainian soldiers are still out there in the trenches, weathering daily artillery attacks, mortars, snipers, tank shots, and rockets, in a static war that feels like it has no end. The war is mainly fought from trenches and fortified positions along about 250 miles of front lines in the Donbas. It’s a long-range battle, in which soldiers hardly ever see whom they’re shooting at.

It’s a terrifying type of combat, which I had never experienced during my career as an Air Force special operations pilot in Iraq and Afghanistan.

The February 2015 cease-fire, known as Minsk II, is a farce. The war is still going on, and soldiers and civilians, on both sides, are still dying and being wounded almost every day.

Yet, the war has hardened Ukraine, both its citizens and its soldiers, and proven that the country is ready and willing to fight for its freedom.

During my years of reporting on the war, Ukraine’s military evolution has been nothing short of remarkable.

In 2014, the Ukrainian army was a rudderless force, which had been gutted in equipment and personnel by 25 years of purposeful neglect and dismantling by successive, corrupt governments that were beholden to Moscow.

In the past three years, and while fighting a war, Ukraine has rebuilt its military into the second-largest in Europe, comprising about 250,000 active-duty troops and 80,000 reservists. On the Continent, only Russia’s military is bigger.

“It’s like building a boat while you’re already out at sea,” Luke Coffey, director of The Heritage Foundation’s Foreign Policy Center, told me.

Additionally, Ukraine increased its military budget by 23 percent the year after the war began. Ukraine’s current defense budget of about $6 billion represents roughly 6 percent of the country’s [gross domestic product]. And military spending is set to increase by about 10 percent annually.

Similarly, Ukraine’s arsenal comprises 625 multiple launch rocket systems—compared with 44 in France, 42 in the U.K., and Germany’s 50. 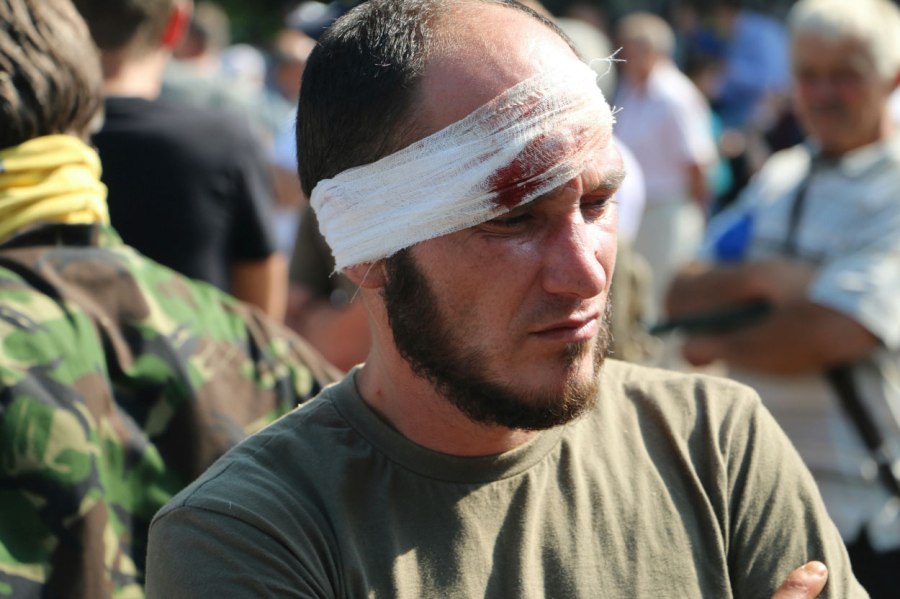 Yet, while Ukraine maintains a numerical advantage over other European nations in terms of troops and conventional weapons, its military needs to modernize. Much of its arsenal dates from the Cold War.

Many of the Kalashnikovs the Ukrainian troops use have serial numbers from the 1970s, some from the 1960s or older.

Yet, in a complete about-face from the Cold War, Ukraine’s strategic military doctrine now identifies Russia as the country’s top security threat. Resultantly, Kyiv is rebuilding its military with the specific objective of defending against a Russian invasion and adopting NATO standards by the year 2020.

To modernize, Ukraine is revamping its military-industrial complex.

In 2015, Ukraine was the world’s ninth-largest weapons exporting nation. In 2016, Ukraine’s arms exports contracts jumped by 25 percent from 2015 levels, totaling about $750 million.

Petro Poroshenko, Ukraine’s president, has called for Ukraine to rank among the world’s Top 5 weapons exporting countries by 2020.

Yet, in my opinion, the revamp of Ukraine’s military-industrial complex has been misguided.

For example, after more than two years of a static conflict, there are still no [mobile army surgical hospital] units off the front lines to provide initial medical care for wounded troops. If wounded, Ukrainian troops travel across potholed roads, often in the back of civilian vehicles, to get to the nearest hospital for treatment.

At most places, Ukrainian soldiers still used Soviet-era paper maps of the battlefield. Although some enterprising university students have created apps for tablets, which can be used for targeting artillery on a digital map of the war zone.

But the soldiers still have to buy the tablets on their own.

In the front-line town of Marinka, Ukrainian troops have to steal electricity from the local power grid because—after three years of war—the government hasn’t yet given them generators.

Even something as simple and inexpensive as modifying off-the-shelf drones for reconnaissance and targeting mortars is still being done by civilian volunteers. Many of whom are patriotic university students.

The bottom line: Ukraine’s military-industrial complex is being undermined by corruption. Altogether, it’s more committed to building weapons for export than meeting the needs of Ukraine’s troops in the field.

The Ukrainian government allocated 13.5 billion hryvnias (about $500 million) in 2016 to repair, modernize, and produce new weapons for its armed forces.

Ukroboronprom, however, said it received only one-third of this amount from the government, and is operating at less than half its production capacity.

Yet, despite its materiel shortfalls, Ukraine now has a battle-hardened military that has been fighting a type of conflict, with which virtually no active-duty U.S. troops have combat experience. 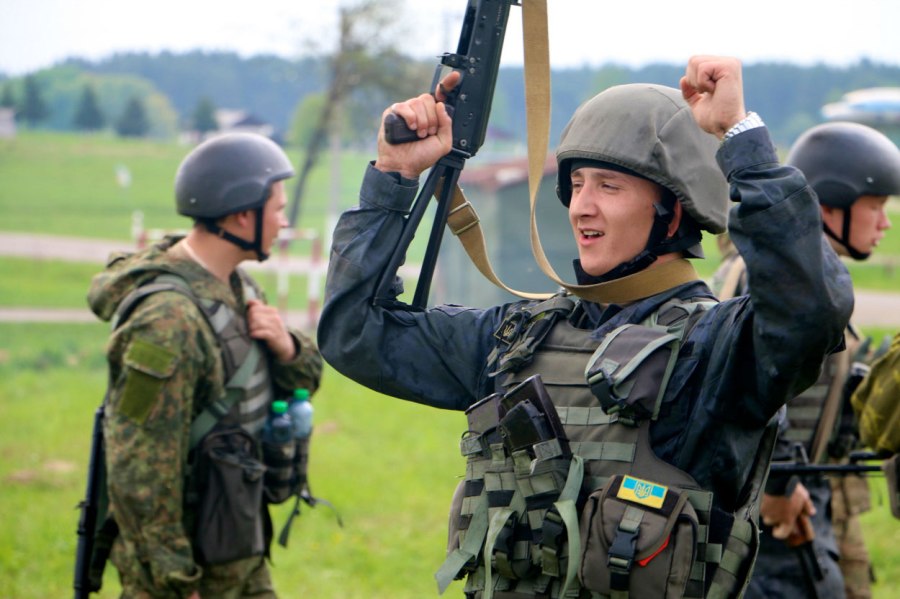 I’ve had the chance to observe the U.S. Army’s training operation at Yavoriv, in western Ukraine. And the overall impression I had was that the Ukrainian soldiers had more to teach the Americans than vice versa.

Trench warfare, tank battles, artillery and rocket barrages—Ukraine’s army has years of experience fighting a conventional war with no air support, scant possibility of air medevac, and limited supplies. They’re used to being on the weak side of a fight. That’s not a familiar place for most U.S. troops to be.

Ukrainians also have years of experience defending against Russian hybrid warfare, including cyberattacks and targeted propaganda. In short, Ukraine has a lot of experience, which the U.S. military and its allies, if they are wise, should study to understand what a war with Russia would look like.

The war in Ukraine is a case study in Russian hybrid warfare. And Ukrainian troops, with limited means available, have improvised a successful defense against it.

Each time I visit the front lines, I ask the Ukrainian soldiers what they’re fighting for. Throughout three years of unending combat, their answers have not changed.

They say they’re fighting for their country’s freedom. They believe that if they laid down their arms, left their positions, and went home, Russia would simply invade behind them.

Underscoring this existential threat to the homeland, Ukrainian society has militarized due to the war.

Across the country, civilians regularly meet on the weekends for military training. They comprise a network of partisan forces called territorial defense battalions, which can be rapidly mobilized to defend against a Russian invasion.

This grassroots defense mindset—which saved Ukraine from disaster in 2014—promises a protracted guerrilla conflict should Russia ever again launch a major offensive in Ukraine.

Ukrainians have the will to fight. They’ve proven that by fighting and dying for their freedom, singlehandedly, against the world’s second-strongest military for more than three years. But they need help.

The U.S. has, to date, provided Ukraine with some technology, which has proven useful on the battlefield. I’ve observed Ukrainian troops using the U.S. Raven drone on the front lines outside the town of Marinka, to target their mortars on enemy positions and vehicles.

The U.S. has also equipped Ukraine’s military with counter-battery radars, which are now deployed to protect some military positions.

They are not being used, however, to defend civilian areas, like the towns of Marinka and Avdiivka, which frequently come under rocket and artillery attacks.

A Ukrainian military official told me: “These units, although nonlethal, are still considered to be weapons, therefore we do not place them in residential areas or cities in order to not attract enemy fire and jeopardize the safety of civilians who live there.”

The perennial question here in Washington is whether the U.S. should send Ukraine lethal, defensive weapons. Based on what I’ve seen, and from conversations with Ukrainian officials, U.S. lethal weapons would, at this point, be a largely symbolic gesture. But it would send a strong message to Moscow about U.S. resolve to defend Ukraine from more aggression.

It would also be an affirmation for the right of any people, no matter whose sphere of influence within which they find themselves, to choose their own destiny.

Yet, to truly make a difference on the battlefield, as it exists today, Ukrainian troops still need the basics like body armor, night vision goggles, encrypted radios, and first aid kits.

One last, quick aside before I close.

While I was embedded with the Ukrainian army in Pisky in June 2015, I made friends with an impressive 19-year-old soldier named Daniel Kasyanenko. He was afraid that the war was ruining his soul, he told me, and that he had seen too many horrible things to ever be happy again.

Two months after I met him, a mortar killed Daniel while he was fighting in the trenches in eastern Ukraine.

Yesterday, I emailed Daniel’s mother, Marina, and told her I was here in Washington to tell people about the war, and what her son had died fighting for.

She replied to me: “Thank you. The whole world must learn the truth about the war in Ukraine. You do what you can to prevent our boys from dying.”