The pro-life activists who created undercover videos that triggered multiple state and congressional investigations into Planned Parenthood’s abortion practices are facing more than a dozen new felony charges in California.

The charges, brought by the state’s attorney general, allege Center for Medical Progress founder David Daleiden and his partner, Sandra Merritt, unlawfully recorded people without their consent, and conspired to invade their privacy. In total, Daleiden and Merritt face 15 felony charges.

Daleiden dismissed the charges as “bogus” and politically motivated.

“The bogus charges from Planned Parenthood’s political cronies are fake news,” he said in a statement. “The public knows the real criminals are Planned Parenthood and their business partners like StemExpress and DV Biologics—currently being prosecuted in California—who have harvested and sold aborted baby body parts for profit for years in direct violation of state and federal law.”

The charges date back to videos the pro-life activist group Center for Medical Progress secretly recorded and published in 2015. Those videos raised questions about whether Planned Parenthood profits off the sale of tissue and body parts from aborted babies, which is illegal under federal law.

Planned Parenthood has consistently denied these allegations, and issued a statement applauding the new charges brought against Daleiden and Merritt. 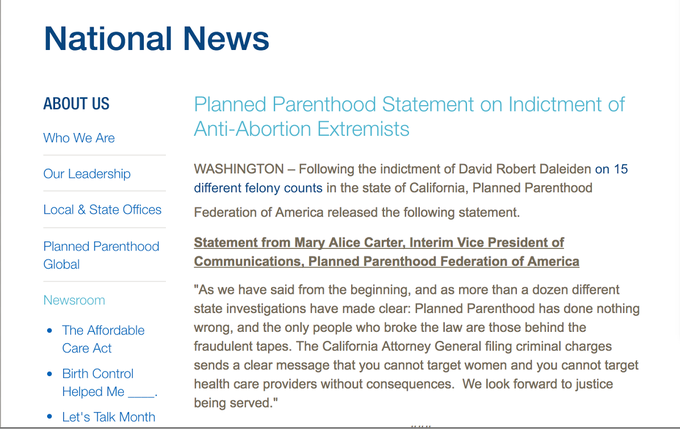 The Daily Signal also reached out to middlemen tissue procurement companies StemExpress and DV Biologics, but they did not immediately respond.

Casey Mattox, a senior counsel at the pro-life Alliance Defending Freedom, told The Daily Signal that even in two-party consent states like California, “It’s well understood as a matter of First Amendment law that people have a right to be able to record their own conversations.” He added:

Planned Parenthood was cleared by several states that investigated the matter, but a yearlong congressional probe launched by Republicans resulted in a handful of criminal and regulatory referrals to the Department of Justice.

Daleiden and Merritt already faced charges in Texas, where a Houston-based grand jury indicted them for using fake IDs during their undercover investigation. Daleiden was also indicted for “intentionally and knowingly” offering to buy human organs.

In July 2016, a Texas district attorney dismissed the criminal charges brought against Daleiden and Merritt.

The new charges in California come as Congress gets closer to defunding Planned Parenthood. The failed Republican health care plan, which had the backing of Republican leadership and the White House but was opposed by many conservatives and centrists, would have defunded Planned Parenthood for one year.

Now, Republicans are eyeing a budget tool called reconciliation to strip the nation’s largest abortion provider of its taxpayer dollars.

Already, taxpayer dollars are banned from being used to fund abortions under the Hyde Amendment. However, conservatives maintain the more than $500 million Planned Parenthood receives is fungible, and winds up subsidizing thousands of abortions each year.

In light of the new allegations, the Center for Medical Progress released a brand new video on Wednesday. In that video, a former Planned Parenthood medical director in Arizona allegedly says abortion doctors “need to pay attention to who’s in the room” to deal with an infant born alive.

In his statement, Daleiden suggested that more videos are likely to come.

“We look forward to showing the entire world what is on our yet-unreleased videotapes of Planned Parenthood’s criminal baby body parts enterprise, in vindication of the First Amendment rights of all,” he said.

The Daily Signal contacted Planned Parenthood for comment. The organization has not responded.